Browsing the local delights of the organic grocery store in my home town in Austria, I picked up a bag of Grünkern. The greenish grains looked pretty and unique on the shelf! Grünkern grains are unripe spelt kernels cultivated predominantly in Southern Germany. Although mainly used for soups and vegetarian burgers, I wanted to incorporate some of this unique green spelt grain in a sourdough Grünkern bread.

Grünkern (German for ‘green kernel’) is spelt, harvested when green, in the dough stage of ripening, and then dried. Historically, harvesting spelt so early and before it reaches its full ripeness was a reaction to periods of adverse weather, which destroyed crops and resulted in poor harvests. It was a way to prevent crop failure.

The green spelt grains are harvested when the starch isn’t fully developed and the kernels are still soft and juicy at about 50% moisture content. Grains are dried over a beechwood fire or in hot air dryers – right down to a moisture content of 10 to 13%. Once dried, the outer husk is removed. Have a look at gruenkern.de for more information around the harvesting process, then and now.

The dried green spelt kernels smell aromatic and a little bit like fresh hay. The aroma remains uniquely pleasant and hearty when cooked with water, so it became a tradition to harvest a portion of the spelt as Grünkern. Grünkern doesn’t tend to be milled and is typically available as whole grains or chopped grains.

If this sounds similar to another grain, Freekeh, then you are right. Freekeh is also harvested green, then roasted. The difference? Freekeh is made from green unripe durum wheat and dates back to the ancient regions of Egypt, Lebanon, Jordan and Syria while Grünkern is made from spelt and is still mainly produced in Germany.

Watch these videos showcasing the Grünkern harvest back in the 1970s in Germany.

Where to buy Grünkern in the UK?

I’ve only seen Grünkern on Amazon in the UK. Unfortunately, other probable places such as Real Foods or Buy Whole Foods Online don’t seem to stock it.

This recipe adds Grünkern to a wholemeal spelt sourdough loaf. Adding black treacle enhances the flavours, but you can easily leave out the treacle if you would like to taste the pure Grünkern flavours.

How to bake Grünkern bread

A big thanks to Lutz from Plötzblog and Gerd from Ketex.de whose posts have provided the building blocks for this recipe. However, my recipe doesn’t use yeast and relies entirely on the strength of the sourdough rise.

Thanks to my grain mill, I can make the spelt bread simply from a bag of spelt grains, milling what I need and leaving the grains for the soaker whole.

On day 1, prepare the sourdough, spelt grain soaker and scalded flour as follows.

In a medium plastic bowl, combine the ingredients and mix well. Cover with a lid and leave to rise at room temperature for approx. 16 hours.

In a small pot, combine the spelt grains with the salt and pour over the water. Simmer at a low heat until the water has been absorbed (approximately 45 minutes). Cover and keep at room temperature for about 16 hours.

In a medium bowl, pour the boiling water over the flour and mix until the mixture is a smooth pulp. Cover and keep at room temperature for about 16 hours. Adding the scalded flour will allow to bring more moisture into the loaf.

On day 2, prepare the final dough and get ready to bake!

Combine all of the ingredients to form a soft dough and knead carefully for 10 minutes.

Place the dough back into the bowl, cover and leave to rest for 30 minutes.

Wrap in a polythene bag and leave to proof for a few hours. Spelt ferments faster than other flours, so keep an eye on it. I had to slow down the fermentation as I had plans for the day so I placed it in the fridge for a number or hours. In this case, you can just bring the dough back to room temperature before baking, making sure you complete the proofing process.

Leave to cool on a wire rack.

I’m writing this post for a friend who has been advised to eliminate wheat and rye from her diet in favour of spelt flour. As a fellow sourdough devotee, I’ve written up this spelt sourdough starter recipe to help get the new baking routine underway.

Firstly, a few words about the humble spelt…

Evidence suggests that spelt can be tolerated by people with certain wheat intolerances and may be easier to digest. The dietary superiority of spelt flour may be due to the fact that, unlike modern wheat grains, the spelt plant has not been manipulated to meet manufacturing needs.

As an ancient grain, spelt has kept many of its original characteristics; most notably, spelt kernels grow inside a tough outer husk, making the process of de-hulling more difficult for farmers but offering natural protection from insects and disease.

Can you use spelt flour for your sourdough starter?

Luckily for #realbread bakers, spelt is one of the easiest flours to start a sourdough culture with and it should only take a few days to have a lively starter ready for baking.

The following instructions on how to to make spelt sourdough starter are taken from Andrew Whitley’s excellent book Bread Matters: Why and How to Make Your Own

Bread Matters: Why and How to Make Your Own
£21.77
Buy on Amazon 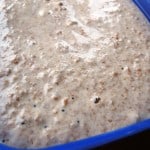 How to make spelt sourdough starter

A note on water by Andrew Whitley in his book Do Sourdough: Slow Bread for Busy Lives (Do Books):   “Tap water is treated with chlorine… which isn’t great for the bacteria that we want to nurture. There are two ways to reduce the chlorine threat: leave a jug of water standing overnight and most of the residual chlorine will evaporate; or use still spring water from a bottle. Once a starter is up and running, it will cope with water straight from the tap. Using a little spring water for the first few days will give your starter the best possible chances.”

Do Sourdough: Slow Bread for Busy Lives (Do Books)
£7.99
Buy on Amazon

Spelt has attributes similar to regular wheat in bread baking and although the gluten network in spelt is a little bit weaker and less elastic, there is enough of it to produce a loaf of good volume.

Enjoy baking with spelt flour – it’s easy to work with and spelt breads will reward you with a very agreeable sweet and slightly nutty flavour.

Here are some recipes you may want to try:

We are celebrating here. With potato bread and champagne, great combination, try it!

Potato bread makes use of potatoes to replace some of the wheat flour. The addition of potatoes keeps the bread moist and prevents it from crumbling.

Usually, potato bread recipes use either raw or cooked potatoes. In this recipe, I’ve combined both methods and also included rye flour (my favourite).

Mix ingredients in a bowl, cover with cling film and keep at room temperature for 2 hours, then transfer to the fridge for 14 hours.

How to make pototo bread

Great with Kerrygold butter and honey but potato bread goes well with most toppings.

Looking for a bread recipe full of wholesome goodness? This loaf of brown seeded wholemeal bread is bursting with healthy seeds and kernels. Great for using up the various bits and pieces you might have waiting in your store cupboard!

Take the pullman loaf tin out of the fridge and  preheat the oven to 190°C for 20 minutes.

Returning from a work trip mid-week, I discovered that pretty much all of our bread stash (fresh and frozen) had been eaten. Noooo! I had to act quickly and this white spelt flour bread recipe was just perfect. If you need a bread-fix quickly, use this simple recipe for a basic white sandwich loaf to help you get by.

This recipe uses white spelt flour which I prefer using over plain wheat flour, but it will work with any plain white flour you have at home.

What you’ll need to make the white spelt flour loaf –

How to make the white spelt loaf –

A great looking white spelt bread loaf –  beautiful with butter and strawberry or raspberry jam in the morning. Great also for soaking up the juices from this amazing autumnal casserole dish.

If you have more time, I would recommend baking the loaf with sourdough instead of yeast. Replace some of the white flour with wholemeal flour, infuse the dough with nigella seeds and you’ll have an entirely new loaf.

Here’s how to make it.

Ingredients for a spelt sourdough loaf –

How to make spelt sourdough bread –

Combine the sourdough starter with 100g white spelt flour, 100g wholemeal spelt flour and 200g water. Mix well and cover with a lid. Keep at room temperature for 16 to 24 hours.

Take 50g of sourdough out of the bowl to put back into the fridge for future sourdough baking before adding the remaining 150g white spelt flour, 150g wholemeal spelt flour, 80g water and 7g salt into the bowl. Follow steps 2 to 10 below but beware that sourdough may take longer to rise. Just before step 6, sprinkle the nigella seeds into the baking tin before placing the dough on top.