Ever since visiting Japan in 2016, I’ve been wanting to replicate the soft white bread loaf omnipresent across the country, and make Japanese milk bread by hand. It’s the fluffiest and most delicate bread I have ever eaten. It’s not like brioche, it doesn’t have the same richness. Japanese milk bread is white bread indulgence of the most feathery kind.

“Japan is generally regarded as being a rice-based food culture. However, bread — or pan in Japanese, derived from the Portuguese word pão — is eaten almost as widely. […] The most ubiquitous type of bread in Japan is the white and pillowy square-shaped bread called shokupan, which simply means “eating bread.” Made of white flour, yeast, milk or milk powder, butter, salt and sugar, shokupan is both loved and taken for granted by most. […] The ideal texture for the crumb of a shokupan is mochimochi — soft yet resilient and bouncy, rather like mochi (pounded-rice cakes).”
Source: Japan’s secret love of a breakfast loaf

An additional reason for looking into Japanese milk bread just now is that I wanted to learn how to bake this lofty white loaf for my little baby daughter, to make eggy bread and baby pizza slices.

Milk bread was developed in Japan in the 20th century, using Tangzhong, a warm flour-and-water paste traditionally used in China to make buns with a soft, springy texture and tiny air bubbles. According to this article in the Japan Times, people started to take bread seriously as a meal staple rather than a snack after the violent Rice Riots of 1918.

The Chopstick Chronicles mention that the Yudane method subsequently originated in Japan and became a widespread and popular way to bake bread after Yvonne Chen introduced Tangzhong roux as a secret ingredient in her book called “Bread Doctor”.

I looked into both the Tangzhong and Yudane methods of baking, and want to briefly outline the difference between these methods (thank you to Lynn Lim for this informative Facebook thread). For my Shokupan recipe – after many experiments using both methods –  I’ve settled on a combination of this version of Shokupan and the Yudane process.

The texture is soft and airy, wonderfully tender. Having tasted milk bread while in Japan, it shouldn’t taste like a super enriched dough (e.g. like brioche). Instead, it should taste like a pure wheat and milk based bread and this is why I have not included eggs in my ingredient list and why I only use a minimal amount of butter in my recipe. It is however important to use whole milk (instead of low fat milk).

“The Yudane breads were very soft just after baking, and the staling (temporal changes in hardness) and starch retrogradation of the breads were somewhat reduced compared to the control. Further, the breads showed generally larger cohesiveness, i.e., the index of bread elasticity. Kinetic analysis indicated reduced bread staling and starch retrogradation rates compared to control. The data showed that the slow staling and unique texture of the Yudane breads were mainly due to the high moisture content, saccharide contents, and flour amylases-modification of swollen and gelatinized starch in the breads, which was related to the higher water absorption and starch swelling and gelatinization levels of the added Yudane dough.”
Source: The Staling and Texture of Bread Made Using the Yudane Dough Method

How to eat Japanese milk bread?

It tastes great with most things, but I like to have it simply with salted butter.

I had it with panko*-breadcrumbed chicken (and mustard) while in Japan which was delicious, the two bread slices acting as wonderful pillows around the meat.
*Panko breadcrumbs are made from Japanese milk bread 🙂

“You can enjoy shokupan in many ways, including some uniquely Japanese concoctions such as sandwiches filled with potato salad or fruit and cream. Do try thickly sliced Kinki-region style toast too. Crispy on the surface and mochimochi on the inside, it’s a great example of a food imported from the West that has been firmly adapted to suit Japanese tastes.”
Source: Japan’s secret love of a breakfast loaf 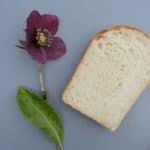 Print Pin
No ratings yet

A lot of recipes I tried and tested used sugar (up to 60g) but I have decided against the use of sugar in this recipe, especially since I wanted to mainly develop this for use for the whole family including our little baby.The Yudane method works so remarkably well to make soft and fluffy bread and makes the bread last longer because the heated gelatinised starch in the flour keeps the moisture inside the bread and it will make the bread soft and last longer.Having experimented with both the Tangzhong and Yudane methods I feel that the Yudane method produces better results. I have also experimented with adding more butter and an egg, but prefer the egg-less version with less added butter. I've also omitted sugar from my recipe as I prefer a non-sweetened version, for taste and for health reasons.
Cuisine Japanese
Keyword bread, milk bread,, white bread
Prep Time 45 minutes
Cook Time 30 minutes
Resting time 6 hours 30 minutes
Total Time 7 hours 45 minutes
Servings 8
Author Pam

How to make Japanese Yudane bread