With the coronavirus COVID-19 situation still very much unfolding, my family (including our 2-year old toddler) have been working from home now for the last 8 weeks. With lockdown fatigue firmly setting in, I wanted to share this comfort-food bread recipe with all of you. This sourdough cinnamon raisin bread is the perfect treat to cheer you up for breakfast or as part of your (new) morning or afternoon snack time. At least in our house, we now have five mealtimes a day…!

This easy cinnamon raisin sourdough bread recipe doesn’t need yeast and you won’t need many ingredients; wheat and rye flour, rye flakes or oats, cinnamon, raisins, salt and water are all you need. I like to have my sourdough cinnamon raisin bread slices toasted with butter. My husband adds a little bit of honey. Whatever way you decide to serve it, I’m sure it’ll receive a ‘loud, resounding cheer’ (there’s been a dramatic increase in storytime reading during lockdown and I find myself using Julia Donaldson‘s language from her books more than can be considered normal!) from all who have gathered around the table.

Before I share the recipe, a couple of interesting points to note about… 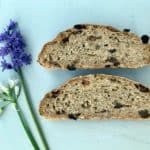 This raisin and cinnamon loaf is rich and plump with fruit, without making the raisin content an overbearing ingredient. The raisins complement the rye-infused sourdough flavours of this bread nicely, while the cinnamon offers that irresistible fragrance.

If you like fruited breads, here are some other options for you to try: