The fennel seed is a a beautiful ingredient for bread baking – think subtle aniseed with warm, sweet aromas. This fennel seed bread recipe brings out the best of the seed’s aromatic flavours. A flavoursome breakfast bread for any day of the week!

For my fennel bread recipe, I’ve chosen a combination of flours: strong white wheat and maize flour. Taking a look at other bakers’ recipes, there are plenty of fennel and nut combos, specifically hazelnuts (e.g. Ottolenghi’s fennel seed crackers or Hamelman’s hazelnut and fig bread with fennel seeds and rosemary). Dried fruits such as raisins, cherries or figs are also popular fennel seed companions (e.g. Andrew Whitley’s semolina, raisin and fennel bannock). As such, I’ve opted for a fennel bread which includes nuts and dried fruit and it works beautifully.

My recipe uses a fruit, nut and fennel seed soaker to infuse some of the liquid that goes into the dough to extract some extra flavour from the seeds and to soften the raisins pre-bake.
I provided options for both a yeast-based and a sourdough-based version of this bread below.

This recipe is based on a small of amount of dried yeast as the leavening agent.

How to make fennel seed bread

This version of the recipe doesn’t use commercial yeast, but uses sourdough starter instead.

How to make fennel seed bread

I also used fennel seeds in this Moroccan bread recipe.

I love polenta and it tastes awesome in bread. Here is my polenta bread recipe for a sourdough loaf with pumpkin and sunflower seeds inspired by Dan Lepard’s polenta bread in The Handmade Loaf.

Combine the above ingredients in a bowl and cover for 24 hours.

Toast the seeds in a small saucepan and cover with the water. Cover for 24 hours.

I personally get on well with gluten, a natural protein found in wheat and other grains. I am, however, painfully aware that not everyone is as lucky. Gluten-free bread recipes don’t have a particularly good reputation; but I found a great recipe that uses a variety of gluten-free flours and tastes delicious!

The role of gluten in breads

When preparing wheat dough, a stretchy web is formed. This elastic gluten network expands with the gases formed in the fermentation process, holds moisture and prevents bread from crumbling.

In gluten-free bread baking, ingredients such as linseed and psyllium husks help to hold the bread’s shape. Golden linseed, when toasted and added to the liquid ingredients of bread dough, releases a sticky gluten-like gum which softens the crumb. Psyllium seed husks, a source of fibre, bind moisture and make gluten-free breads less crumbly.

How gluten-free bread is different

The absence of gluten has a number of implications on the bread and baking process:

There is a good variety of alternative flours which can be used in gluten-free baking. Gluten-free flours can be made of corn, tapioca, buckwheat, rice, chickpeas, beans, soya, millet, potatoes, teff, chestnuts, almonds and peas.

On this note, there are some very interesting findings in terms of making wheat sourdough bread safe for people with coeliac disease. More on this with some encouraging results on Celiac.com.

I used a Dan Lepard recipe for this gluten-free buckwheat and linseed bread, substituting half of the cornflour with buckwheat flour. Cornflour is a useful base flour with good binding properties, however its nutritional value is limited. Buckwheat adds flavour and nutritional quality into the mix.

I don’t have to opt for gluten-free breads, but I think this buckwheat, cornflour and linseed loaf tastes great and takes very little effort. It’s spongy and doesn’t break up or crumble although it’s a little cake-like in consistency. As I used half corn and half buckwheat flour, the bread has a strong buckwheat taste. This isn’t a bad thing at all if you like the distinct buckwheat flavour, like me.

I personally like combining this bread with very salty flavours. It works well with smoked fish, gherkins and cottage cheese but I have also tried more Mediterranean-style toppings such as black olive pâté or a tomato, olive and basil salad with pecorino shavings.

Watching the first episode of Ottolenghi’s Mediterranean Feast set in Morocco, I was (of course) inspired by the industriousness in the Moroccan bread bakery. It brought back memories of my first authentic Moroccan meal, sitting on a balcony overlooking the bustling Jemaa el-Fnaa in Marrakesh.

If you love Middle Eastern & Mediterranean food as much as I do, Yotam Ottolenghi’s cookbooks are an unbelievably wonderful resource:

Now For The Khobz Recipe…

This authentic Moroccan bread, called khobz, is a round, flattish bread with plenty of crust making it an ideal bread for dipping and scooping up tagines and salads.

I found a wonderful recipe for Moroccan bread on the Culinary Anthropologist blog and have adjusted it slightly by using wholegrain spelt instead of wholemeal wheat flour. The bread is usually flavoured with anise seeds; however, I used fennel seeds instead which worked well.

How to make khobz bread

Khobz is best eaten on the day of baking. We had it with this super-tasty lamb tagine, a recipe by Antony Worrall Thompson.

If you have any leftover khobz, try this spicy Moroccan bread salad recipe.

Last Sunday I was invited to a Thanksgiving dinner and my friend Mariel from NY put on a huge feast for us (great homemade rum ice cream also by Rich!). Of course, my contribution to the dinner was going to be bread related and for this occasion it had to be cornbread (the savoury kind). This is my very own savoury cornbread recipe, tried and tested many times.

First of all, some clarification on cornmeal since I live in the UK and this is a typical US dish. Cornmeal (the finely ground version you need for cornbread) is also referred to as maize flour in the UK or you might get finely ground polenta.

Traditionally in the States, a skillet (a cast iron pan with slanted sides) is used for baking cornbread. The skillet is the only way to make it all-round crispy and crunchy. Unfortunately, I’m currently lacking a skillet (not much longer I hope!) so I used a baking tin. You can use the same recipe to make savoury cornbread muffins. Just divide the mixture among the muffin tins and bake for slightly shorter than in the below recipe (about 20 minutes overall). 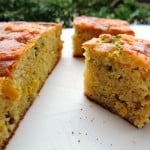 Easy to put together and a great side dish for Thanksgiving, Christmas dinner or any other time of the year, whenever you fancy a delicious snack! TIP: Get all the ingredients ready and all the chopping and grating done before you start putting the savoury cornbread batter together.

How to make cornbread

What a wonderfully colourful bread! Soft and moist on the inside with a deep golden brown top layer.

Experiment with the ingredients, take out the chili and just add some fresh herbs such as thyme. Build a basic cornbread batter and add whatever you are in the mood for – sun-dried tomatoes or olives for example. Note that you might need to adjust the amount of buttermilk you use as the consistency of the batter will be determined by the moisture content of your selection of savoury ingredients.

Wrap any leftovers in foil and reheat in the oven for 10 – 15 minutes.