A look through some of the photos of our most recent trip to Brazil reminded me just how popular and prevalent cassava and tapioca flour products and dishes are across the country. Tapioca flour cheese puffs, farofa (toasted cassava) and tapioca pancakes – both sweet and savoury – were never far when hunger hit.

Having previously experimented with tapioca flour to make the uniquely textured tapioca cheese puffs at home, I collaborated with the team at Buy Whole Foods Online to specifically look at the versatility of tapioca flour in baking. The results are tremendous; an incredibly useful flour, particularly in gluten-free baking, tapioca flour packs a punch in the baker’s kitchen.

How to use tapioca flour for baking

Tapioca (also manioc or cassava) is made by heating the root of the cassava plant. It is then dried into granules (tapioca), flakes or ground into flour. Although not the most nutritious of flours, tapioca flour is useful as a base for breads, cakes and biscuits where a light texture is desired, and it has many other fantastic attributes useful in both sweet and savoury baking.

Over here on DrAxe.com you can find an excellent article on tapioca flour and its properties for baking, and I wanted to summarise the topline facts below:

This is the best and most natural gluten-free bread I have been able to make at home, a recipe by Andrew Whitley from his book Bread Matters. I like it as it doesn’t contain heavily processed ingredients such as xanthum gum. Instead, the ingredient list contains nutritionally valuable flours from natural sources and yeast is used as raising agent rather than baking powder/bicarb of soda. Bread Matters also has excellent recipes for gluten-free pastry, gluten-free cake and gluten-free pizza base, all of which contain tapioca flour.

The flours used in this gluten-free bread recipe: 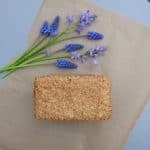 A simple recipe for gluten-free bread using tapioca flour and a variety of other gluten-free flours to produce a great-tasting loaf. The combination of ingredients aims to form a gluten-free loaf of reasonable nutritional value with a texture that is similar to soda bread.
Prep Time 10 minutes
Cook Time 30 minutes
Proofing time 1 hour
Total Time 40 minutes
Servings 8 people

I don’t think it’s really possible to make the real deal Brazilian tapioca pancakes in my home in Edinburgh, Scotland. They just wouldn’t taste quite right. The Brazilian air, the tropical climate, the open-air cooking – to me it all feels it’s important in preparing this delicious street food.

I’ve opted to make a more traditional pancake with tapioca flour although these recipes – Brazilian tapioca pancakes, shrimp tapioca pancakes –  look like great Brazilian options to try if you fancy some tapioca at home. 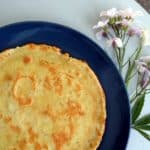 How to make tapioca flour pancakes

I also wanted to feature a sweet tapioca flour recipe here, and luckily, I stumbled upon this delicious biscotti recipe on the Dolce Amaro blog. Crunchy, crumbly and amazingly flavoursome, these are superb tapioca flour biscuits – with white pepper and white chocolate added in as wildcard ingredients. 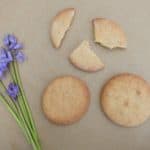 Simply beautiful biscuits with an exceptional bite and superb flavour.

How to make tapioca flour biscuits

I personally get on well with gluten, a natural protein found in wheat and other grains. I am, however, painfully aware that not everyone is as lucky. Gluten-free bread recipes don’t have a particularly good reputation; but I found a great recipe that uses a variety of gluten-free flours and tastes delicious!

The role of gluten in breads

When preparing wheat dough, a stretchy web is formed. This elastic gluten network expands with the gases formed in the fermentation process, holds moisture and prevents bread from crumbling.

In gluten-free bread baking, ingredients such as linseed and psyllium husks help to hold the bread’s shape. Golden linseed, when toasted and added to the liquid ingredients of bread dough, releases a sticky gluten-like gum which softens the crumb. Psyllium seed husks, a source of fibre, bind moisture and make gluten-free breads less crumbly.

How gluten-free bread is different

The absence of gluten has a number of implications on the bread and baking process:

There is a good variety of alternative flours which can be used in gluten-free baking. Gluten-free flours can be made of corn, tapioca, buckwheat, rice, chickpeas, beans, soya, millet, potatoes, teff, chestnuts, almonds and peas.

On this note, there are some very interesting findings in terms of making wheat sourdough bread safe for people with coeliac disease. More on this with some encouraging results on Celiac.com.

I used a Dan Lepard recipe for this gluten-free buckwheat and linseed bread, substituting half of the cornflour with buckwheat flour. Cornflour is a useful base flour with good binding properties, however its nutritional value is limited. Buckwheat adds flavour and nutritional quality into the mix.

I don’t have to opt for gluten-free breads, but I think this buckwheat, cornflour and linseed loaf tastes great and takes very little effort. It’s spongy and doesn’t break up or crumble although it’s a little cake-like in consistency. As I used half corn and half buckwheat flour, the bread has a strong buckwheat taste. This isn’t a bad thing at all if you like the distinct buckwheat flavour, like me.

I personally like combining this bread with very salty flavours. It works well with smoked fish, gherkins and cottage cheese but I have also tried more Mediterranean-style toppings such as black olive pâté or a tomato, olive and basil salad with pecorino shavings.