Prepare the dough on the evening before you’d like to serve the muffins for breakfast. You can keep the dough in the fridge overnight. Take the muffin dough out of the fridge an hour before you need it and – one hour later – you can sit down to enjoy your beautifully flavoursome buckwheat flour English muffins.

How To Make Buckwheat English Muffins

Buckwheat galettes are a weekend breakfast staple in our house and the wonderfully distinctive taste of buckwheat flour makes for interesting bread baking too. There is quite a variety of robust tasting breads and bakes you can achieve with buckwheat. Here is my selection of the best buckwheat bread recipes.

10 things to know about buckwheat

No matter what rocks your taste buds, buckwheat has an answer. A world of possibilities opens up when you start looking at baking with buckwheat flour and I’ve collated a list of some of the very best recipes.

This is my tried and tested buckwheat bread recipe, using sourdough to leaven the dough. The buckwheat flavours are subtle and well balanced. 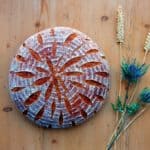 This is a delicious and wholesome bread, with the flavours of buckwheat subtly infusing the sourdough loaf. This buckwheat bread recipe is the perfect bread for both savoury and sweet toppings, ideal for breakfasting and snacking.
Servings 8 people

Bought a big bag of buckwheat flour and not sure what to do with it? There’s a packet of buckwheat groats sitting in your cupboard waiting for its time in the limelight? I feel your pain! Luckily… I have a solution. With these buckwheat groats pancakes you will be going through your buckwheat supplies in no time!

Hidden away in the depths of David Tanis’ book “Heart of the Artichoke and Other Kitchen Journeys“, I found this wonderful recipe for buckwheat galettes which he serves with ham and cheese, but I recommend smoked salmon and cream cheese with rocket dressed in rapeseed oil, lemon and garlic; a great dish for weekend brunch. I also really like the addition of buckwheat groats and have opted not to mill them. It makes for a lovely texture and looks good too! 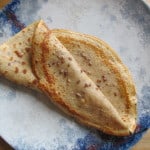 Prepare the pancake batter the night before making the buckwheat pancakes.

How to make buckwheat groat pancakes