Although barley is almost exclusively used in the brewing industry on account of its very low gluten content, barley flour is a really nice ingredient to introduce into bread baking. You’ll have even more reason for using barley if you are looking to keep the glycemic index (GI) of your home-baked bread as low as possible. I’ve been baking with barley flour ever since I came across the delicious barley rusks (used to prepare Dakos) hugely popular on the Greek island of Crete and after lots of research and experimentation I’d like to share my barley flour bread recipe with you.

If you’d like to make Greek barley rusks at home try this recipe which uses 44% barley flour. Firstly though, I want to give you some background on barley flour and the glycemic index GI/ glycemic load GL values of different types of grains.

I’ve recently looked into low glycemic bread options as I’ve had to ensure my blood sugar levels were as stable as possible throughout the day for health reasons connected to my pregnancy. Out of all the grains, barley seems to come out on top. It contains a soluble fiber called beta-glucan which has been shown to slow glucose absorption and thought to help lower blood cholesterol.

The table below shows (reasonably) comprehensive information comparing the GI and GL of different grains, flours and one specific brand of bread. Data source: http://www.diogenes-eu.org/GI-Database/Default.htm

“The Glycemic Index (GI) is a relative ranking of carbohydrate in foods according to how they affect blood glucose levels. Carbohydrates with a low GI value are more slowly digested, absorbed and metabolised and cause a lower and slower rise in blood glucose and, therefore usually, insulin levels. Glycemic Load (or GL) combines both the quantity and quality of carbohydrates.  It is also the best way to compare blood glucose values of different types and amounts of foods. The formula for calculating the GL of a particular food or meal is: Glycemic Load = GI x Carbohydrate (g) content per portion ÷ 100.” Source: https://www.gisymbol.com/

The Glycemic Index Foundation suggests that a GI of 45 or less is classified as low GI. For GL, 10 or less qualifies as low GL.

From the table below, we can see that only barley is low GI and none of the grains or flours listed qualify as low GL. Nonetheless, barley scores well.

My barley bread recipe has taken inspiration from the above-mentioned Vogel’s sunflower and barley brown bread, incorporating both wheat and barley flours as well as sunflower seeds.

Opt for barley bread if you are looking for a hearty addition to a low-GI diet.

It is best to use barley flour in conjunction with high-gluten flour. My barley flour recipe uses 50% barley flour and 50% wholewheat flour to ensure the bread rises better. By adding at least 50% wheat flour benefits the crumb. In the interest of flavour and extensibility, I wouldn’t recommend to increase the % of barley flour. The higher the percentage of barley in relation to wheat, the less extensible the dough. I increased the dough hydration as well in order to account for the higher water absorption of the flours. 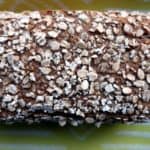 Barley flour adds a pronounced sweetness and a suggestion of maltiness to this loaf. This is even more pronounced due to the added barley flake soaker. Add in some pre-boiled barley kernels to make a coarser type of barley bread if you wish.
Servings 8